Is anyone else hiding in a hole today to get away from the US election coverage?  It’s always important to be informed but sometimes you just have to have a media break in these times of constant political bombardment.

One thing that struck me as interesting about this campaign is that it seems to be that a large proportion of voters won’t be particularly gleeful regardless of the outcome.  So many people feel that they are forced to choose between two imperfect candidates. There are of course third party options but on days like today where there is a known sexual predator / racist / overall corrupt individual on the ballot, I know many people who would vote for a ham sandwich if that sandwich had a shot of taking down the other candidate.

Switching gears now, I’d like to rather selfishly re-direct this conversation toward my documentary.  As most of you know by now, I have been working on a film for over two years.  It’s been a labour of love – something I have worked on at night and on weekends, through a challenging pregnancy, and then in between nappy changes and feeds after 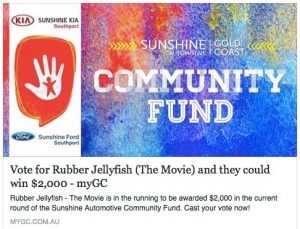 my now 14 month old was first born.  The project has been self funded by myself and my partner and rather expensive when all the travel and equipment costs are added up.

We have a chance right now at a $2,000 gift through the MYGC radio competition.  We will need a lot more than $2,000 to completely finish the film but this is a big step in the right direction because it would get us 66 hours of professional editing.  We have already received one small grant so far from the Pollination Project which has allowed us to bring on board a fantastic editor with experience on a feature length Nat Geo film.  If we can manage to get this other $2,000 from
MYGC we can keep her going which is absolutely what we need.

I know it can be annoying voting for these things because they sign you up for their newsletters but you always have the option of unsubscribing later!  Considering the frustration so many of us are feeling right now about the US election and not being particularly fond of any candidate, this small little radio competition presents an opportunity where you can actually vote for something you believe in and that will have far reaching benefits for wildlife, marine ecosystems, and human life.

For any of you who aren’t familiar with my project and what it is all about, my film examines the myth of 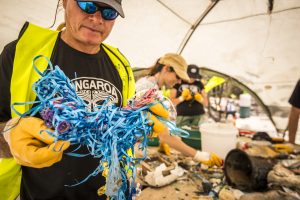 the biodegradable balloon and explores all the ways that balloons are wreaking havoc on marine ecosystems, the animals that live in those ecosystems (especially sea turtles), and human lives as well.  Did you know that balloons cause more infant fatalities than any other child product?  Shocking, isn’t it?!  It was news to me too.

To learn more, please check out our website or any of our social media channels:

Here is the link again to vote (click here!!!) – it really will be a big help to us!  And if you have a generous heart and would love to offer a donation (which will go 100% toward final production and editing costs, please visit our donate page. There are some perks available!)

Ps – Thank you to Christian Miller of the Tangaroa Blue Foundation for the photo above of blue balloon strings that were collected on a beach cleanup at Cape Kimberley.