Rubber Jellyfish is making a difference!

Rubber Jellyfish was released theatrically on September 26, 2018.  Since then, momentum and enthusiasm for the project has been steadily growing.

The film has been featured on such outlets as Sunrise, Today Tonight, King 5 News, and ABC Radio National and screened by activists, organisations, community groups, festivals, and universities in over 60 locations all around the world. Screenings have been hosted by Sea Shepherd, Balloons Blow, Algalita, NOAA, Southern Cross University, Sunshine Coast Council, and dozens more.

Activists are using the film as a conservation tool to push better legislation across the line and create a social change that is saving the lives of vulnerable endangered animals. We are so thrilled.

People walk away from our screenings feeling motivated to help spread the word about the  environmental damage caused by balloons and dispel the mythology that latex balloons are “environmentally friendly”. We are hearing that the film has been especially useful for marine environmental activists that have been working to make change around marine debris and balloon litter for years. Often they report back that the film was just what they needed to give their message the extra boost to get better legislation passed and to further the public understanding around the issue.

The film has also attracted quite a lot of media attention, click here to view some examples of Rubber Jellyfish in the press.

Here is a list of some of the positive changes the film has inspired so far (in order of the most recent).

After two successful Rubber Jellyfish screenings in Fremantle, organised by local veterinary nurse and marine activist, Lisa Jane Hills, balloon releases are now banned from all government properties across Fremantle with a $125 fine in place. More on this legislation here.

The host of our  first American Rubber Jellyfish screening managed to avert a balloon release that was planned to follow the memorial for a young man who had tragically passed away. We are grateful for the compassionate, non-judgemental but informative approach this retired school teacher turned RJ screening host used to avert this polluting event!

A member of Sea Shepherd learned about this planned release (which was widely advertised as the finale event at a charity fundraiser) and worked with Boycott Balloons Fremantle to avert the release. BBF mentioned Rubber Jellyfish in their discussions with the organisers that lead to the release being canceled. We do not know how many balloons were planned to be released but we do know that every attendee was to be given a balloon and the founder of Boycott Balloons Fremantle was informed by one of their organisers that they saved hundreds of dollars by deciding not to go through with the release. Well done!!

Ray White (the largest real estate company in Australasia)’s Corporate HQ stopped manufacturing branded balloons which previously were available for order by all Ray White franchises. This happened as a result of the RJ film maker emailing the real estate conglomerate a balloon in the jellyfish shape with a Ray White logo that was found on a sea turtle nesting beach by volunteers of a sea turtles rescue group in Sunshine Coast, Queensland. Prior to this, Ray White franchises ordered roughly 30,000 balloons a year.  This story is part of the documentary.

September, 2017: Bainbridge Island (a bedroom community near Seattle) banned the release of balloons. This occurred as a result of a council member viewing the Rubber Jellyfish trailer prior to release of the film.

December, 2018 –  Wyndham Destinations banned the use of balloons at all events throughout the Asia Pacific area

Wyndham Destinations, a vacation ownership, exchange, and rental company banned the use of balloons at all of their events throughout Asia Pacific after learning about the damage caused by balloons when one of their staffers attended the Rubber Jellyfish Premiere on the Gold Coast. Their choice has been celebrated by numerous hospitality news outlets so with any luck more businesses in the hospitality industry will follow –

How you can help

If you learn of a planned balloon release, take action

Balloon release ceremonies can often be averted when someone mentions to the organisers that they are extremely environmentally hazardous. Usually the organisers of these events are under the false impression that latex balloons are “environmentally friendly” and simply need to be informed that this is not accurate. Feel free to contact us for support in averting a balloon release ceremony.

By far, the greatest thing you can do to put an end to the balloon madness is to simply never purchase a balloon and help spread the word about the dangers of balloon release ceremonies.

Attend or host a beach cleanup

Environmental organisations often hold community beach cleanups. If you have an opportunity to attend one, or to organise one, please do!

Attend or host a screening

Magic happens when people view this film on the big screen, in the company of like minded souls. Click here to see if there is a screening planned near you or to volunteer to host one if there isn’t.

Help the film get into schools

The film maker and Rubber Jellyfish protagonist Carly is working with the Queensland University of Technology on a slate of educational materials to accompany the film as part of a PhD dissertation on impact strategies for environmental documentaries. These educational materials will be available, once complete, to schools who have purchased a Rubber Jellyfish education licence. School libraries often have a budget for acquiring educational licenses for documentary films. If you have a school aged child or are affiliated with an educational institution, you may suggest the school purchase an educational license to screen the film and allow students to download it.

As with all environmental and social issues, it is important to make your elected officials aware of your concerns. We strongly encourage community groups, environmental organisations, and individuals to hold letter writing sessions in support of bans on balloon release ceremonies – particularly if you become aware of a planed release.

Rubber Jellyfish is registered with the Documentary Australia Foundation. Donations made to the film at this stage will be used in our education and outreach strategy.

Feel free to save this photo to your computer or phone and share it on your social media channels or share it directly from our Facebook page. 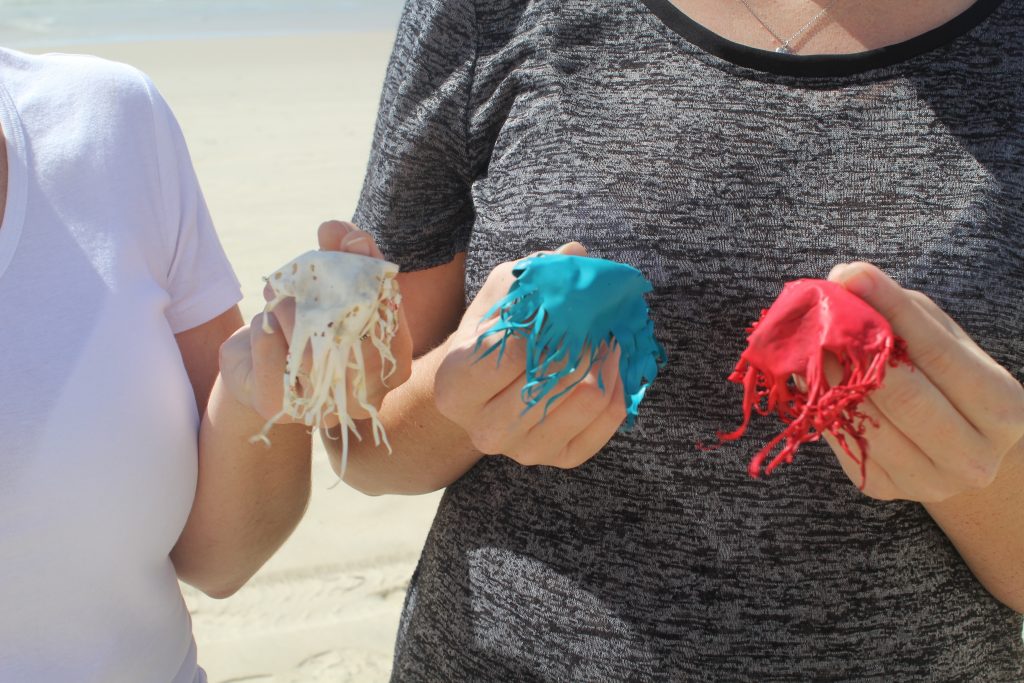